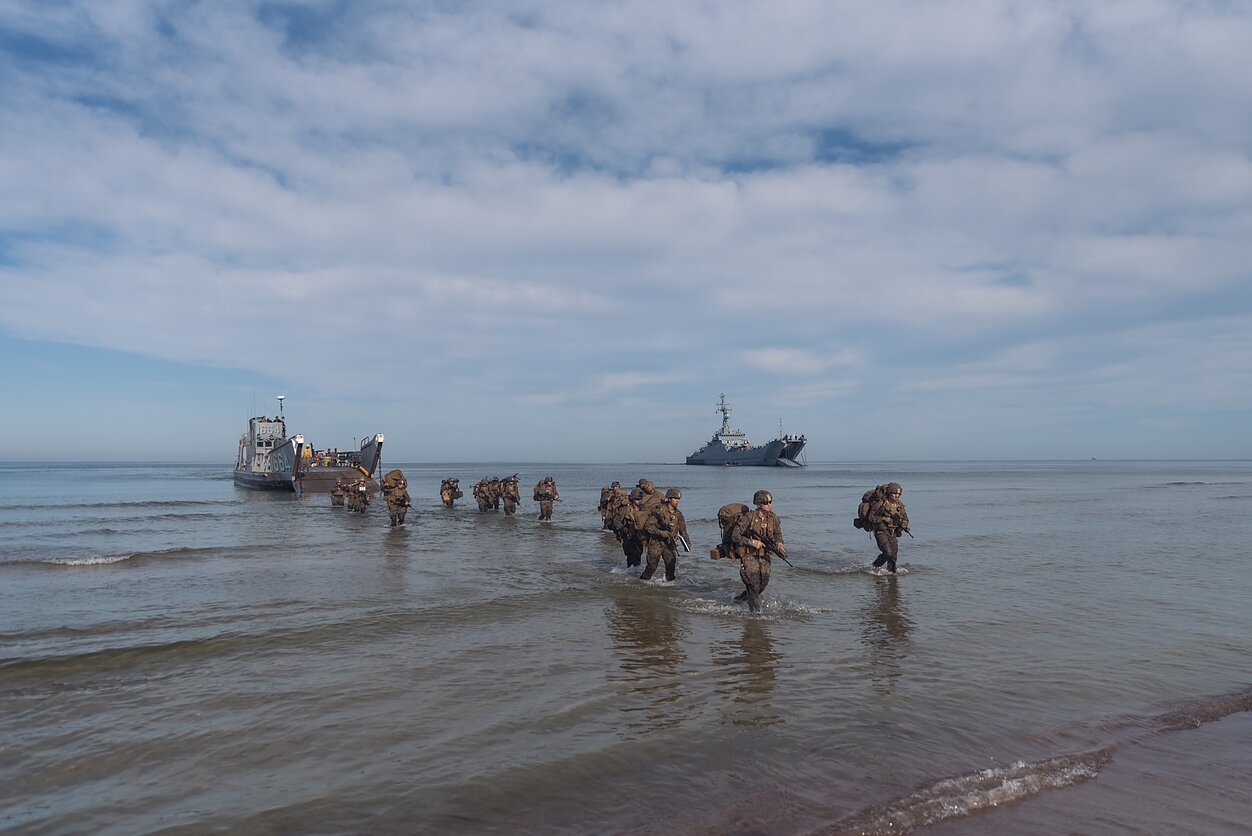 Maritime operations have once again been a major theme of recent headlines in Estonia, Latvia, and Lithuania. Following the NATO BALTOPS exercises this summer, repeated violations of the Baltic States’ airspace by Russia, and observing current combat diving operations in Tallinn Bay, maritime security issues are particularly relevant. Unfortunately, given the long-standing emphasis on land-based deterrence, the maritime domain has largely been neglected.

BALTOPS 2019 revealed a key weakness for naval operations: the shallow and largely unmarked coastline hampered amphibious landing operations in Lithuania. Not only do these conditions make amphibious landing operations slower and more difficult, they even present major operational hazards. One Polish landing vessel reportedly ran aground during the exercises. While there is not much that can be done about shallow water, Lithuanian and U.S. forces have responded to these weaknesses by conducting coastal observation studies and exploring the seabed along the Lithuanian coast. Given that the Baltic States’ only land border with the rest of the alliance is the narrow Suwałki Gap on the Polish- Lithuanian border, NATO cannot rely on land connections for logistical support. As such, the ability to conduct amphibious landings with troops and supplies is vital.

It would be wonderful if a poorly marked coastline and shallow water were the only deficiencies in the Baltic States’ maritime defense. Unfortunately, the Baltic States lack the ability to prevent Russia from projecting power into their territorial waters, port facilities, exclusive economic zones, and other littoral areas. Furthermore, the Baltic States cannot prevent Russia from temporarily taking control of these areas. The Russian Baltic Sea fleet may not be overly large or impressive, but it is more than capable of maintaining the status quo, harassing military and civilian activity at sea, and taking surprise offensive action. After all, Russian naval harassment is not unknown – Lithuanian sailors laying the NordBalt cable were repeatedly antagonized by Russian ships – and grey zone operations are a key component of Russian strategy.

This situation only gets worse. The Baltic States are currently deficient in intelligence, surveillance, and reconnaissance (ISR) capabilities at sea. They do not have full, integrated, and shared awareness across the surface, subsurface, and air domains. Individual states’ capabilities vary, but Estonia, Latvia, and Lithuania are all deficient at ISR in the maritime domain given the context of their current security environment. Likewise, the Baltic States have had varying levels of success with sharing information. As it stands, there is no full-time command center to process threats at sea and determine how to respond. The multiple recent violations of Baltic airspace by Russian military aircraft underscores the importance of ISR capabilities and information sharing between the Baltic States. In order to process and respond to threats, one first must know that they are there.

Yet more bad news: the maritime domain hosts several key components of the Baltic States’ critical energy and communications infrastructure. Undersea cables, gas interconnectors, and onshore facilities such as the Klaipėda LNG terminal are all vulnerable to attack. Many cables are unburied and unhidden, such as the NordBalt cable, which connects the Baltic and Nordic electricity markets. Likewise, many other infrastructural components are poorly guarded, if at all. These components create key weaknesses for Russia to exploit in the event of an attack. Cutting off gas or electricity supply will likely wear down societal resilience to propaganda, and will complicate military logistics and decision making as well.

With such a heavy focus over the last several years on land-based deterrence, the Baltic States have largely neglected the maritime domain. CPT Bill Combes (U.S. Navy, retired) refers to this condition as “sea-apathy,” and it has led to gaps in procurement, awareness, capabilities, and strategy. Many experts, such as Combes, have provided excellent suggestions to improve the situation. The author makes no attempt to claim the following recommendations as his own, but has selected those from other experts that he has deemed most practical and actionable:

Second: in order to reduce costs and improve interoperability, the Baltic States should identify opportunities for joint procurements in maritime ISR technology.

Third: the Baltic States need to implement a combined and cooperative Naval Operations Center in order to best focus individual maritime capabilities to mutual benefit and facilitate higher-end NATO operations. Further, the Baltic States should establish a joint Maritime Command Center which could identify and process threats and determine how best to respond.

Finally: Latvia, Lithuania, and Estonia all need to focus on becoming effective “coastal powers,” as Combes calls it. Their navies do not need to be large and grandiose, but they do need to be able to protect infrastructural assets, trade, and communication in the maritime domain.

The current situation in the maritime domain is most certainly not ideal. However, it can be improved by taking practical steps like those outlined above and participating in ongoing NATO training exercises. The coast is a key component of the Baltic States’ security both in peace-time and in the event of war. As such, “sea-apathy” cannot remain a feature of the Baltic States’ defense posture.